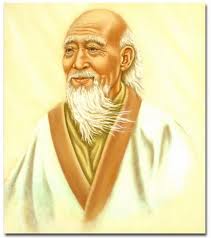 Lao Tzu was a philosopher of ancient China and is attributed with the writing of the “Tao-Te Ching,” (tao—meaning the way of all life, te—meaning the fit use of life by men, and ching—meaning text or classic). His association with the Tào Té Chīng has led him to be traditionally considered the founder of philosophical Taoism.

Lao Tzu was born around the year 604 B.C. in Louyang (nowadays Ho-nan province), China to the name Li Erh. The honorific name Lao Tzu (translated the old sage or master) was given to him later on in life when he worked for the King of Zhou as the keeper of the imperial archives.

During his time as the keeper of these royal scrolls, Lao Tzu studied the archive’s books avidly. Being keeper of archives and sacred books, Lao Tzu gained a great deal of knowledge over time which he used in his wisdom and philosophy. Some of the topics he would have most likely been knowledgeable in were astrology and divination.

He was a peer of the famous Chinese philosopher Confucius (551–479 B.C.E.), and he is reported to have given an interview to Confucius when he came to Loyang seeking information on the Chou ritual.

The birth of the Tao

In Lao’s understanding that came from self-teaching himself with the scrolls accumulated over centuries in the library, he saw that he would get no satisfaction in life staying where he was.  He felt depressed by what he had seen over his time working for the king, such as men refusing to follow the path of natural goodness. Upon reaching eighty years of age, unhappy with the dishonest political situation, Lao Tzu decided to go into retirement.

He set out for the western border of China going towards Tibet on a water buffalo leaving civilisation behind. As he was passing through the Hanku Pass west of Loyang, the gate-keeper, knowing that he would not return, persuaded him to record the principles of his philosophy for posterity.  Lau Tzu decided for three days to compose a book of all his wisdom. The result was the eighty-one sayings of the “Tao-Te Ching” meaning The Book of the Way. This ancient Chinese text is the world’s most translated classic next to the Bible.

Almost everything known about Lao-tzu comes from the Historical Records of Ssu-ma Ch’ien. There’s no further indication concerning the life of the sage in the West; he simply gets out of sight the minute he passes the boundary of the state of Ch’u disappearing into the wilderness.

Lao Tzu’s wise counsel attracted followers, but he refused to set his ideas down in writing. He believed that written words might solidify into formal dogma. Lao Tzu wanted his philosophy to remain a natural way to live life with goodness, serenity and respect. Lao Tzu laid down no rigid code of behaviour. He believed a person’s conduct should be governed by instinct and conscience.

Lao Tzu believed that human life, like everything else in the universe, is constantly influenced by outside forces. He believed “simplicity” to be the key to truth and freedom. Lao Tzu encouraged his followers to observe, and seek to understand the laws of nature; to develop intuition and build up personal power; and to use that power to lead life with love, and without force.

Quotes from the Tao Te Ching

If you understand yourself you are illuminated.

If you overcome others you are powerful.

If you overcome yourself you have strength.

If you know how to be satisfied you are rich.

If you can act with vigor, you have a will.

If you don’t lose your objectives you can be long-lasting.

If you die without loss, you are eternal.”

–       “A leader is bestWhen people barely know he exists

Of a good leader, who talks little,

When his work is done, his aim fulfilled,

They will say, “We did this ourselves.”