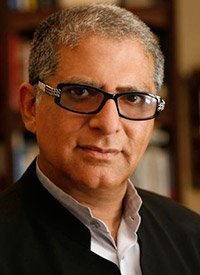 Dr. Chopra began his career as an endocrinologist and later shifted his focus to holistic medicine by integrating the ancient wisdom traditions of the East with traditional Western medicine and recent discoveries in the field of quantum physics. He has forged a holistic approach to healing that has had enormous popular appeal as well as widespread professional acceptance. Dr. Chopra is board-certified in internal medicine and specialised in endocrinology and is also a member of the American Medical Association (AMA), a Fellow of the American College of Physicians and a member of the American Association of Clinical Endocrinologists. Dr. Chopra is transforming the way the world views physical, mental, emotional, spiritual, and social wellness.

Chopra was born in New Delhi, British India. His father was a prominent Indian cardiologist, head of the department of medicine and cardiology in New Delhi for over 25 years and a lieutenant in the British army.  Chopra was raised in a family infused with both Western medicine and spiritual beliefs and practices. His paternal grandfather was a sergeant in the British Army who looked to Ayurveda for treatment for a heart condition when the condition did not improve with Western medicine.

Chopra remembers “My father was a very prominent physician and cardiologist. Once a week he would see patients free of charge for charity. And patients would come from all over the country, actually, to see him, on trains and buses. My mother would cook food for them and pay their bus fare and train fare. And my little brother and I would escort the patients in to see my father, who would not only write the prescriptions, but pay for the medicines for them as well. And at the end of the day, my parents would sit with me and explain what had happened during the day. And the moral of the lesson always was, that if you want to be happy, then you have to make somebody else happy.”

Sanjiv Chopra, Deepak Chopra’s younger brother, is now a professor of medicine at Harvard Medical School and has several publications and five books to his credit that have been translated in several languages.

As a senior student in Delhi’s St Columbus School, Deepak was a good writer and an eloquent speaker. As a young man, Chopra’s desire was to become an actor or journalist, but he reports that he was inspired by a character in “Arrowsmith” by Sinclair Lewis and became a doctor. Chopra completed his primary education in New Delhi and received his medical degree from the All India Institute of Medical Sciences (AIIMS). While still at AIIMS, he saw the flaws in mainstream medicine. Once, he said: “I thought that they would talk about health, but they talk only about disease.” It was probably the beginning of his disenchantment with the traditional mould of modern medicine and a rediscovery of India.

Dr. Chopra envisioned a career in Western medicine, and in 1970 moved to the United States, leaving his home country with just $25 in his pocket and the promise of a residency at a hospital in New Jersey. Following the residency, Chopra landed in Boston, where he quickly rose to chief of medicine at New England Memorial Hospital. He was also Chief at Boston Regional Medical Center in Boston, Massachusetts, before establishing a private practice. In addition, Dr. Chopra taught at the Tufts University and Boston University Schools of Medicine

Despite his rising career, Chopra became disenchanted with Western medicine and its reliance on prescription drugs. The work began to wear on the promising doctor, who would later claim that he smoked up to a pack of cigarettes a day and drank consistently to relax. He was counselling his patients to change their self-destructive habits, but began to recognise that he could not make such changes in his own life.

Eventually overcoming his previous biases against the mysticism of his native India which might hold the key to alleviating his stress, in 1981 Chopra became receptive to the message of Meditation, Yoga and Ayurveda. He was particularly impressed by the sizeable amount of research that proves that the daily practice of meditation reduces stress. Within two weeks he stopped smoking and drinking and eventually changed his career path. “At first I did meditation mainly to relax, but it changed my whole life—my diet, my work, my relationships with patients and other people,” he says. “I became 10 times more efficient in my work.” He soon lost his taste for alcohol, and other self-impairing habits spontaneously fell away.

As his interest in alternative medicine deepened, so did his view on the limits of Western medicine. Dr. Chopra and his wife went on to learn the advanced meditation techniques.  In 1985, Dr. Chopra met Maharishi Mahesh Yogi who invited him to study Ayurveda. In that same year, Dr. Chopra left his position at the New England Memorial Hospital and became the founding president of the American Association of Ayurvedic Medicine, and was later named medical director of the Maharishi Ayurveda Health Center for Stress Management and Behavioral Medicine. Dr. Chopra was a top assistant to Maharishi Mahesh Yogi before following his own path in the early 1990s by publishing self-help books on mind-body medicine, wellbeing, health, spirituality and alternative medicine.

By 1992, Dr. Chopra was serving on The National Institutes of Health Ad Hoc Panel on Alternative Medicine. In 1993, Chopra became executive director of the Sharp Institute for Human Potential and Mind–Body Medicine with a grant from the Office of Alternative Medicine in the National Institutes to study Ayurvedic medicine. Dr. Chopra moved with his family to Southern California where he now has a home with his wife near his two adult children, Gotham and Mallika.

That same year, Dr. Chopra and Dr.  David Simon founded the Chopra Center for Well Being, to offer educational programmes to nurture body, mind and soul.  Most of the Chopra Center’s workshops, seminars and events aim at providing tools and resources to foster physical healing, emotional wellbeing and spiritual awakening. Almost all of these programmes incorporate Meditation, Yoga and the ancient wellbeing system of Ayurveda. The University of California, San Diego, School of Medicine and American Medical Association have granted continuing medical education credits for some programs offered to physicians at the Chopra Center.

The Chopra Center University was created to educate and train people to gain mastery and provide formal instruction in disciplines such as Meditation, Yoga and Ayurveda. Since its inception, the Chopra Center University has created a widespread community of international certified teachers of mind-body balance who support the physical, emotional and spiritual transformation of thousands around the globe.

In 2005 Dr. Chopra was made a Senior Scientist at The Gallup Organization and Adjunct Professor at Kellogg School of Management.  Dr. Chopra regularly lectures at Harvard University’s Divinity School, Medical School and Business School and is also a Distinguished Executive Scholar at Columbia Business School, Columbia University in New York.

In 2009 Chopra established the Chopra Foundation with a mission to participate with individuals and organisations in creating a critical mass for a peaceful, just, sustainable, and healthy world through scientifically and experientially exploring non-dual consciousness as the ground of existence and applying this understanding in the enhancement of health, business, leadership and conflict resolution.

The Chopra Foundation is dedicated to improving health and well being, cultivating spiritual knowledge, expanding consciousness, and promoting world peace to all members of the human family. In 2010 the Chopra Foundation sponsored the first Sages and Scientists Symposium with prominent scientists philosophers and artists from around the world.

In 1995, Dr. Chopra was the recipient of the Toastmasters “International Top Five Outstanding Speakers” award.

In 1997, Dr. Chopra was given the Golden Gavel Award by Toastmasters.

Dr. Chopra was presented with the Medal of the Presidency of the Italian Republic awarded by the Pio Manzu International Scientific Committee. In the citation, committee chairman and former Soviet premier Mikhail Gorbachev referred to Chopra as “one of the most lucid and inspired philosophers of our time”.

Esquire magazine designated him as one of the “top ten motivational speakers in the country”.

In 2010, Dr. Chopra received the Cinequest Life of a Maverick Award for his collaborations with filmmakers Shekhar Kapur and his son, Gotham Chopra. The award goes to “inspirational individuals who touch the world of film while their greater lives exemplify the Maverick spirit.”

He received the 2010 Humanitarian Starlite Award “for his global force of human empowerment, well-being and for bringing light to the world.”

Dr. Chopra was the recipient of the 2010 GOI Peace Award. The Foundation presents the Goi Peace Award annually “to honour individuals and organisations in various fields that have contributed to the advancement of world peace and humanity.”

In 2012, Dr. Chopra received the CIF Chanchlani Global Award for “his outstanding work on expanding humanity’s understanding of the crucial connection between body, mind, spirit, and healing.”