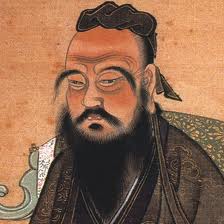 Confucius was born June 19th, 551 B.C. at Shang-ping, in China.  He was a Chinese teacher, editor, politician, and philosopher of the Spring and Autumn Period of Chinese history. His own name was Kong, but his disciples called him Kong-fu-tse, (i.e. Kong the Master, or Teacher,) which the Jesuit missionaries Latinized into Confucius.

His father died when Confucius was only three years of age, but he was very carefully brought up by his mother, Yan-she, and from his earliest years, displayed an extraordinary love of learning, and veneration for the ancient laws of his country.

When only 19, Confucius married, but divorced his wife four years after marriage in order to have more time for study and the performance of his public duties.

The death of his mother, which occurred in his 23rd year, gave occasion to the first solemn and important act of Confucius as a moral reformer. The solemnity and splendour of the burial ceremony with which he honoured her remains, (an old custom which had fallen into disuse,) struck his fellow citizens with astonishment, and they determined for the future to bury their dead with the ancient honours.

Their example was followed by the neighbouring states, and the whole nation, except the poorest class. Confucius did not end here. He shut himself up in his house to pass in solitude the three years of mourning for his mother, the whole of which time he dedicated to philosophical study.

Confucius reflected deeply on the eternal laws of morality, traced them to their source, imbued his mind with a sense of the duties they impose indiscriminately on all men, and determined to make them the immutable rule of all his actions. Henceforth his career is only an illustration of his ethical system.

He commenced to instruct his countrymen in the precepts of morality, exhibiting in his own person all the virtues he inculcated in others. Gradually his disciples increased, as the practical character of his philosophy became more apparent.

His disciples generally were not the young and enthusiastic, but men of middle age, sober, grave, respectable, and occupying important public situations. This fact throws light both on the character and design of his philosophy. It was moral, not religious, and aimed exclusively at fitting men for conducting themselves honourably and prudently in this life.

Confucius travelled through various states, in some of which he was well received, while in others he was not much appreciated. His later wanderings were very unpropitious: state after state refused to be improved. He was in some instances persecuted; once he was imprisoned and nearly starved, and finally seeing no hope of securing the favourable attention of the mass of his countrymen while alive, he returned in extreme poverty to his native state, and spent his last years in the composition of literary works, by which posterity at least might be instructed.

He died 479 B.C., in the 70th year of his age. Immediately after his death, Confucius began to be venerated and his family was distinguished by various honours and privileges.

While Confucius’ system is termed a religion, it ought rather to be regarded as a method of political and social life, built upon a slight foundation of philosophy. It contains no trace of a personal God, though there are indeed a number of allusions to a certain heavenly agency or power, Shang-te, whose outward emblem is Tien, or the visible firmament.

Confucianism appeals to practical men. It lauds the present world and calls upon all to cultivate such virtues as are seemly in citizens – industry, modesty, sobriety, gravity, decorum and thoughtfulness. It also counsels men to take part in whatever religious services have been established of old.

“There may be some meaning in them, and they may affect your welfare in a way you do not know of. And for the genii and spirits, sacrifice unto them; I have nothing to tell regarding them, whether they exist or not; but their worship is a part of an august and awful ceremonial, which a wise man will not neglect or despise.”

Confucianism, in consequence, almost immediately after the death of its author, became the religion of the state, to which it proved an admirable ally.